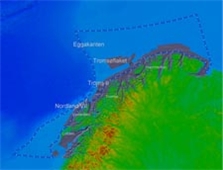 So far, the maps cover an area of 6.000 square kilometres. The grey areas show where detailed data on depths can be found. Click to enlarge the image.“In general, you can say that the geology of the Tromsø sheet is rather homogeneous. However, we have mapped many exiting shapes”, said team leader, Marine Geology at NGU, Reidulv Bøe.

One area of particular interest is “Sopphola” (the fungus pit), farthest to the west in the mapped area. As the name indicates, this is an area where fishermen throughout history have picked up large quantities of “fungi” or sponge, and the area is therefore believed to hold a special biological value.

Institute of marine Research (HI), Geological Survey of Norway (NGU) and the Norwegian mapping authority has carried out an extensive mapping of depth conditions, seabed conditions, biology and types of nature in the Barents Sea since the autumn of 2005.

The ice ages have left their marks

The area is marked by recessions and hills on the seabed. The geological data indicates that moving glaciers, probably during the last ice age 20-30.000 years ago, has made these shapes.

When the ice moved across the seabed it has pulled large flakes along, creating recessions, and left them further ahead, creating hills.

At www.mareano.no/kart you can now gain a geographical insight into the following topics: 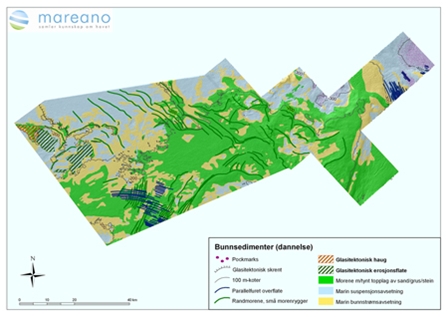 One of the new maps from the Tromsø sheet is “Floor sediments (formation)”. The composition of the sediments, which shapes they form and how they are placed in the landscape tells us which processes has been involved in forming today’s’ seabed. These processes have been ongoing for thousands of years, since before the end of the last ice age. Click to enlarge the image.