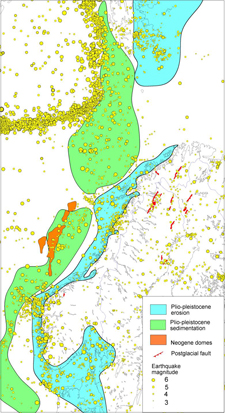 The map shows where sediments were placed earlier (blue) and where they are today (green). The yellow dots indicate earthquakes. Storfjorden is situated in an erosional zone with great earthquake activity. The earthquake data are gathered and analyzed by NORSAR. Click to enlarge the image.Frequent occurrence of earthquakes along the Mid-Atlantic Ridge is old news. It stretches throughout the Atlantic, over Iceland, Jan Mayen and northbound west of Svalbard. The Mid-Atlantic Ridge is the divide between the eastern and western sheets, with Norway placed on the eastern and Greenland on the other.

However, researcher at NGU, Odleiv Olesen, thinks there is another explanation to the great earthquake at Svalbard.

Odleiv Olesen.“The ice ages during the last one or two million years have transported large quantities of sediments away from Storfjorden and out to the deep sea. This discharge has probably created movement and tensions in the earth’s crust which finally triggered the earthquake,” said Olesen.

Along the Norwegian coast, the ice has moved considerable quantities of sediments from the coast to the deeper ocean. This process has been ongoing for more than a million years and 30-40 ice ages. The Storfjord-area at Svalbard has in other words been marked by erosion in a more recent era, seen in a geological perspective.

The Billefjord-faulting is an old north to south going altered zone in Storfjorden. It is possible that the earthquake originated in this particular zone. On the mainland we can see today’s earthquakes occurring along older structures in the earth’s crust, like the Møre-Trøndelag-fault and the Oslo-rift.

“We can find a number of earthquakes along the Norwegian coast, particularly outside Helgeland and the west coast, all caused by seabed erosion. When large quantities of sediments are removed from one area, the land will rise and new tensions will arise in the earth’s crust,” said Odleiv Olesen.

“At the same time, the depositing in the deep ocean will lead to subsidence and deformation of the sea floor crust and following earthquakes.”

“The largest known earthquake in Norway before the one in Storfjorden was probably caused by this kind of process,” said Olesen.

This quake happened in the Lurøy-Rana area in 1819 and measured approximately 5.8 on the Richter scale. Researchers have long debated whether tensions caused by erosion could cause such massive earthquakes. “If not proven before, this might be a solid indication,” said Olesen.

Is the moon to blame?

Researchers have implied that changes in gravitational forces caused by lunar eclipse might play an important role in relation to earthquakes. A lunar eclipse occurred on the night of February 21st when the quake at Svalbard was triggered.

“A lunar eclipse might have significance as to when the earthquake was released, but not as to if it is triggered. That would have happened sooner or later anyway,” concluded Olesen.